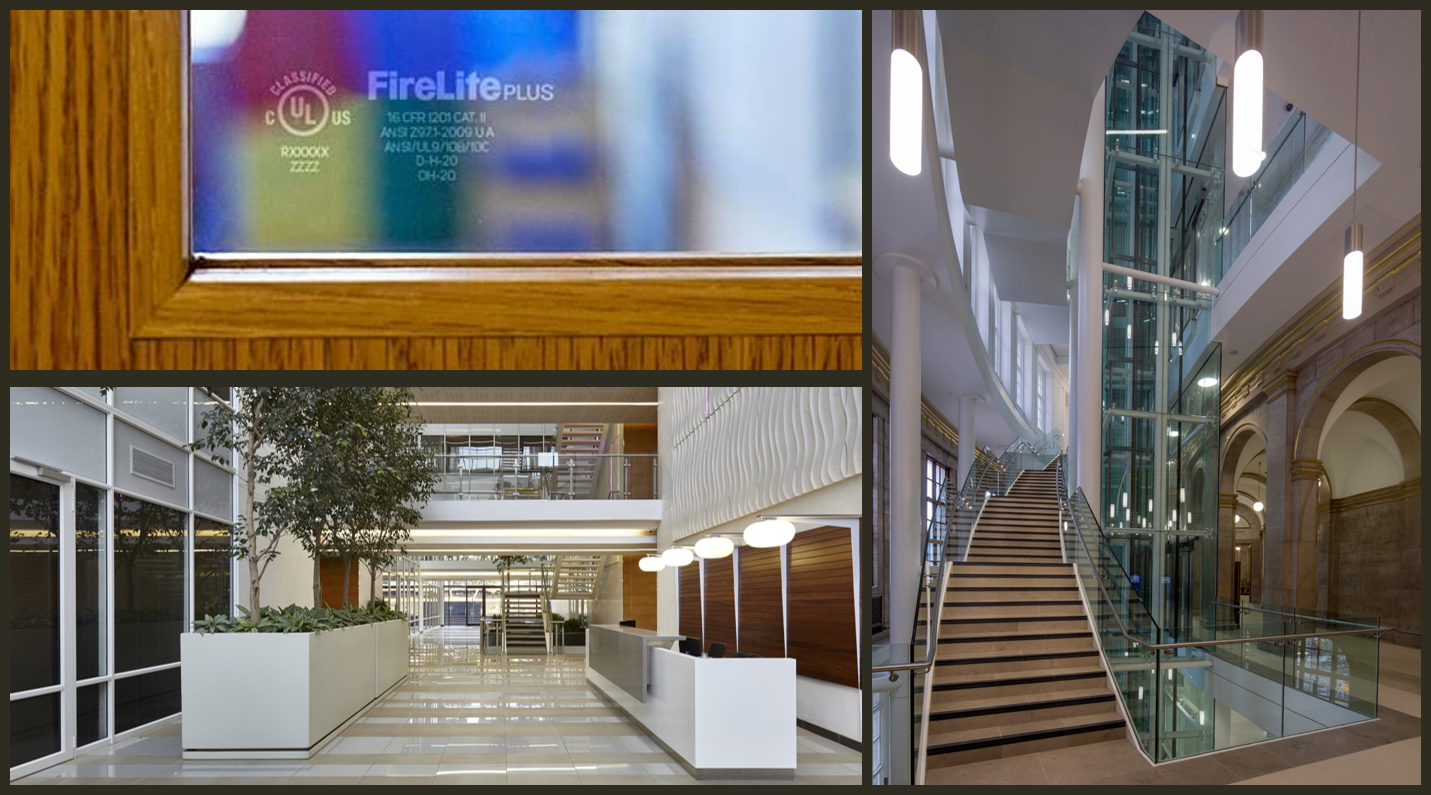 Over 100 years ago architects and designers had a problem. Beautiful homes with ornate skylights, glass-walled atriums and tropical greenhouses were in high demand despite the growing number of injuries that resulted when skylight, atrium and greenhouse glass was broken in storms and natural causes. Their first attempt was to put up wire mesh to catch falling glass and prevent injuries, but then someone had a brain-storm. What would happen if the wire was imbedded in the glass? Frank Shuman, American inventor, was credited with inventing wire glass safety glass in 1892.  This was the first step in the process of creating fire protective glass and the discovery was unintentional.

The premise behind wired glass was that when the glass broke it would stay in place and not fall or cause injuries. When this wired glass started to be used regularly it was discovered that it was fire protective as well – inhibiting flames and smoke, making it fire-protective. This great discovery helped, but it didn’t stop radiant heat.

Ceramic glass was developed next with many improvements over wired glass. For instance, it blocks smoke and fire for a longer time, has a much higher temperature rating and can be installed in locations subject to human impact. Additionally, it is more asthetically pleasing by eliminating the wire, but it did not take glass to the next step of being fire-resistive. To have glass that is truly fire-resistive and protect people from radiant heat along with smoke and flame intumescent glass was created.

Intumescent glass has been on the market for the last 10-20 years and is a high-quality glass system that is virtually indistinguishable from standard glass. Featuring a clear intumescent layer, the glass is fire-resistant without sacrificing any light or visual lines. As the following graphic shows, intumescent glass incorporates a clear material sandwiched between glass layers, meeting fire-resistive standards (blocking flames, smoke, and radiant heat) when it is exposed to fire.

Here’s a fire test video which shows the contrast of fire-protective glass and fire-resistive glass in how it meets safety standards in this severe test: Fire Test Video

Many architects are using intumescent glass to enhance the natural light and beauty in their projects and capitalize on its ability to conserve energy. Intumescent glass opens possibilities for design that were previously impossible with fire rating standards, including whole fire rated walls.  As it is included in many more buildings, we all need to better understand how it works.  This graphic shows clearly how the tempered glass closest to the flame breaks down, but the clear gel material between layers turns opaque and absorbs the heat, protecting the layer of glass on the unexposed side. The flame side is over 1700 degrees, but the other side is not only free from smoke and flame, it is protected from radiant heat and only rises to about 250 degrees on the surface of the glass. Additionally, when intumescent glass is subjected to the hose stream test, it doesn’t break.

As we observe the rise in use of intumescent glass, code writers, officials, plan reviewers and contractors need to focus much more on it to make sure fire protection is more technically viable especially when it comes to maintaining fire rating of the building. As we’re learning more about how to keep buildings safe we can consider a few aspects that the International Building Code has already put in place providing fire safety.

A big change was when ceramic glass was developed it replaced wire glass in fire doors. Not to discount its fire safety, but ceramic glazing took the place of wired glass because people have been known to break through wired glass and have severe injuries. Ceramic glazing is allowed in locations subject to human impact and is popular in doors because of its unobscured view. Ceramic glazing is resistant to high temperatures and does not shatter when it is properly treated, and is therefore an appropriate glass in some doors.

With all these different kinds of glass available to them, contractors want to be sure to have the right kind of glass for each position in the project. The 2015 International Building Code (IBC) tables 716.3, 716.5 and 716.6 shows how glass is marked with corresponding positions it can be placed in a building. For a full list, click here: IBC Chapter 7. While this is not an exhaustive list, here are some of the most common markings found on glass.

As building inspectors and code experts we want you to be confident in the integrity of your project. We are often asked about fire rated walls and how the code applies in light of all the new glass innovations. Let us caution you, don’t confuse building construction type requirements with opening protection requirements. For example, a door or window opening in a one-hour rated building does not necessarily have to also be fire rated. The IBC is very clear about when opening protection is required to prevent fire spread in a building. Remember that unless the code requires opening protection specifically, opening protection is not required. With these seemingly contradictory requirements, many people are confused when trying to maintain code compliance. This is where it is valuable to consult with code experts such as those at CCI, before the costly code violations occur.

Call or email us today!

How to determine “Type of Construction” for your project