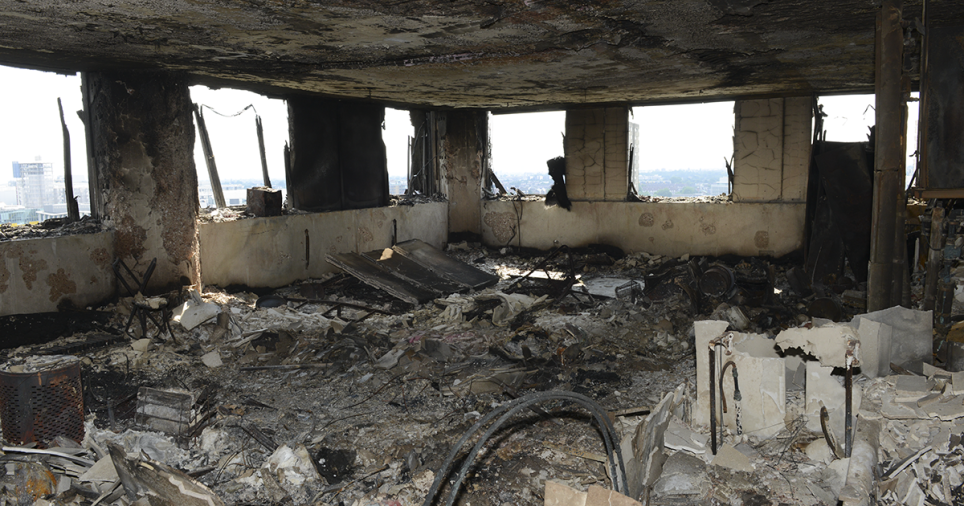 One of the tragedies of this year was the horrific fire in a west London high-rise apartment building on June 14. The fire took the lives of at least 80 people and caused more than 70 injuries. The fire reportedly spread from an apartment on the fourth floor, climbed outside of the 220 foot-high, 24-story building and reentered the building on the upper floors in a matter of 30 minutes. Not only did the fire spread fast, it trapped residents as the only stair tower was contaminated with smoke and the building did not have a fire sprinkler system.

Life safety is the highest priority for all fire codes. If the International Building Code (IBC) had been followed while renovating this building, it is reasonable to say that lives would have been spared. The renovation project that specifically lead to this fire was covering the original exposed concrete spandrel walls with new energy efficient cladding and adding one layer of combustible insulation against the concrete spandrel walls.  This new design created an air space between the insulation (Celotex RS5000 PIR thermal insulation) and the aluminum sandwich panel cladding (Arconic’s Reynobond ACM – PE core).  This air space provided a path for fire spread and a potential chimney effect.  Section 715.4 of the 2015 IBC requires all voids in curtain walls to be properly fire-stopped at the floor line.  The fire-stop at the floor line was not present as part of the Grenfell Tower cladding project.  Building safety experts had warned of using combustible insulation in 2014 (article here).

The critical design decision which directly impacted the vertical fire spread was to select Arconic Reynobond ACM (PE) for use on a high rise building in contradiction to building codes, including the 2015 International Building Code Section 1407.10.  Arconic does produce a product that complies with the IBC for this application called Rynobond Zinc Composite – it has a flame spread index of 25 or less and a smoke developed rating of 450 or less.  Disastrously, the facade contractor installed cheaper cladding vs the originally planned fire resistive cladding (article here).

Around the world there have been several high-rise fires involving the use of combustible insulation at the exterior of the building, including:

It is important to realize that modern building codes greatly restrict burning characteristics of any insulation or cladding in high rise buildings. Use of combustible materials on high rise facades is a recipe for disaster and is unacceptable in any circumstance. The Grenfell Tower facade remodel project saved about $250,000, but using combustible facade material cost the lives of over 80 people and injured over 70 more, to say nothing of the complete destruction of the building. As Horace, the Roman poet, said, “Your own property is concerned when your neighbor’s house is on fire.” Here at CCI, we are passionate about helping our clients build the safest structures while adhering to modern building codes. Contact us before you begin your next project and let our expertise guide you.

How to determine “Type of Construction” for your project